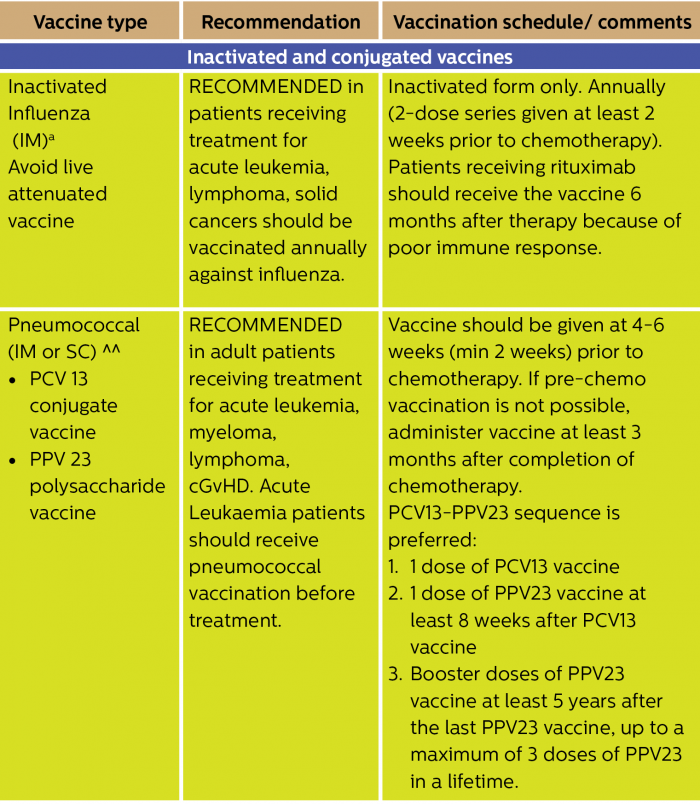 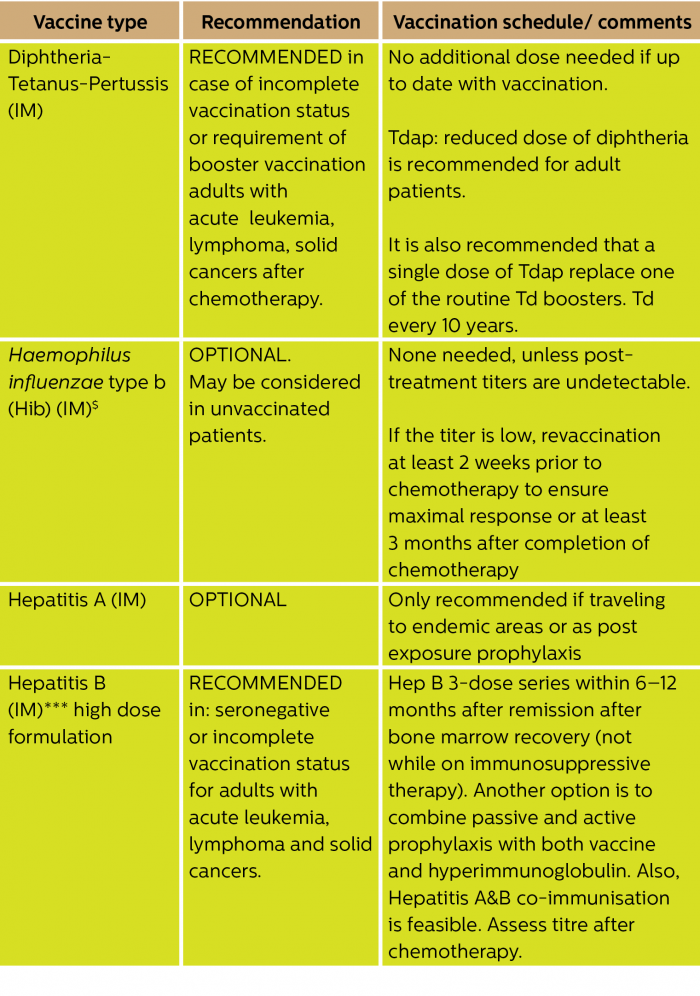 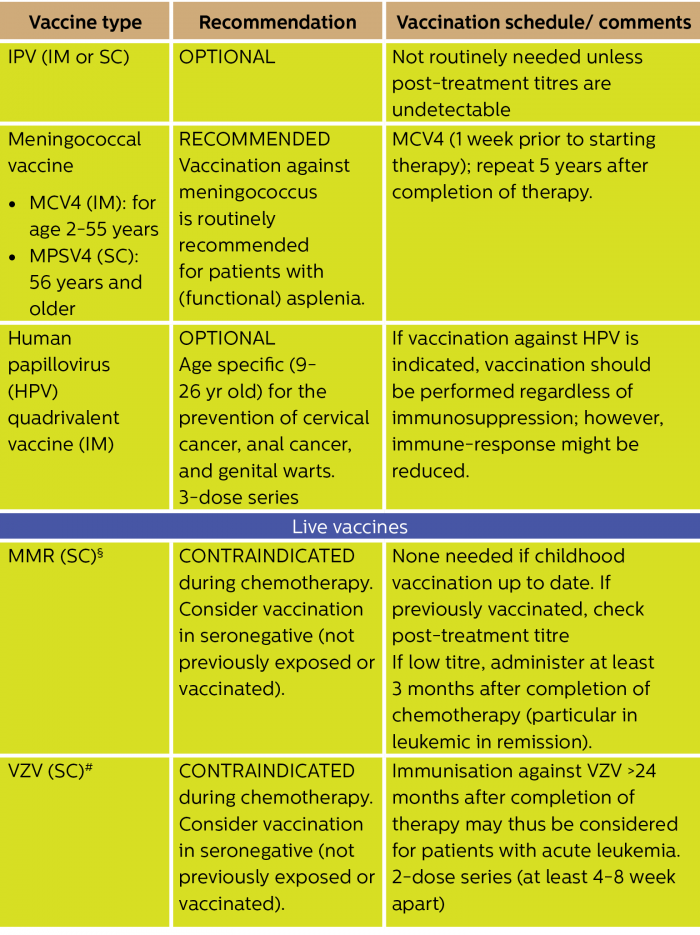 The risk of severe infection is influenced by the underlying malignancy and the cancer specific therapies.

Live vaccines, e.g. against MMR, yellow fever and varicella, are generally contraindicated during chemotherapy [including maintenance therapy with monoclonal antibodies or immunomodulatory agents, e.g. lenalidomide, as well as conditions with significant immunosuppression]. After completion of immunosuppressive therapy, live vaccines against MMR and varicella might be considered after assessment of antibody titres.

a – Administer inactivated influenza vaccine (IIV) annually to patients with hematological malignancies (strong, moderate) or solid tumor malignancies (strong, low) except those receiving anti-B-cell antibodies such as rituximab or alemtuzumab (weak, low). The Infectious Diseases Society of America also suggests that IIV be avoided in patients receiving intensive chemotherapy such as for induction or consolidation therapy for acute leukemia (weak, low). However, we favor giving an inactivated influenza vaccine to such patients given the need for annual administration to protect against circulating seasonal strains of influenza. Administration of inactivated vaccines other than IIV, which are routinely recommended for healthy children in the annually updated United States Centers for Disease Control and Prevention (CDC) recommendations, can be considered for children with malignancies who are receiving maintenance chemotherapy (weak, low). However, vaccines administered while receiving cancer chemotherapy should not be considered valid doses (strong, low). Administration of indicated inactivated vaccines 2 or more weeks prior to chemotherapy is preferred. IIV can be administered ≤ 3 months after chemotherapy, but response rate may be low. Two doses of influenza vaccine may be more immunogenic than one and are well tolerated in children and young adults. VACANCE trial suggest a second administration of influenza vaccine in cancer patients as this increased seroconversion from 44% to 73%. It is also recommended that family members and caretakers also receive annual inactivated influenza vaccination if there is contact with those who are immunosuppressed. The observed side effects of the inactivated influenza vaccine are similar in all populations in that they are generally mild and may include soreness or pain around the injection site, fever, fatigue, or myalgia.

^^ If pretreatment vaccination is not feasible, we recommend vaccination after the first chemotherapy cycle and repetition 3 months after chemotherapy, PCV13 is more immunogenic than PPV23. Due to a lower immunogenic response, patients receiving treatment for multiple myeloma, Hodgkin and non-Hodgkin lymphomas, and cGVHD, as well as those who have undergone total-body irradiation, should be vaccinated with PCV13 instead of PPV23. For patients aged ≥ 19 years who have received PPV23, PCV13 should be administered after an internal of ≥ 1 years after the last PPV23 dose (weak, low).

***HBV vaccine should not be given while patients are on immunosuppressive therapy. As immune-response for HBV-vaccine was shown to be impaired in this population [23], patients with AL should receive several doses (AIII) vaccination against HBV is recommended in lymphoma, myeloma patients in case of incomplete vaccination status or if a vaccination refreshing is required (BII). Inadequate immune-response should always be considered and in individual patients, passive immunisation against HBV could offer short-term protection.

Assessing titres of diphtheria, tetanus and HBV might be useful after chemotherapy.

# These live viral vaccines should not be administered during chemotherapy unless indicated based on CDC recommendations AND the patient is not immunosuppressed AND there will be an interval of ≥ 4 weeks prior to initiation of chemotherapy. Adult cancer patients seronegative for VZV show increased rates of complications (e.g. dissemination, mortality), if primarily infected. Only one study investigated immunity and safety of VZV vaccine in (pediatric) leukemia patients and showed benefits regarding immunity against chickenpox for at least 3 years.

As a functioning B cell compartment is required for an adequate immune response, vaccination within the first 6 months after anti-CD20 therapy is generally discouraged.

Within the first year after anti-CD20 therapy, assessment of antibody titers and revaccination if indicated might be an effective strategy to achieve protective antibody levels despite a diminished immune response. Particularly in case of seasonal influenza vaccine after anti-CD20 therapy, administration of a second booster vaccine has been shown to significantly increase humoral immune response.

While most data on vaccination strategies have been obtained with the oldest anti-CD20 antibody rituximab, it is generally accepted that these recommendations be transferable to other anti-CD20 antibodies such as ofatumumab or obinutuzumab as well as to other temporarily B cell depleting therapies such as the anti-CD3xCD19 bispecific T-cell engager blinatumomab.

Due to the different pathways affected, the effect of kinase inhibitors on immune response to vaccination is entirely dependent on the drug in question. In a small study of patients with metastatic renal cell carcinoma treated with the tyrosine kinase inhibitors sorafenib or sunitinib, no significant difference regarding protective antibody responses after influenza vaccination could be observed compared with healthy controls. Another small study with chronic lymphocytic leukemia patients treated with ibrutinib showed seroprotective titers against common influenza virus strains after vaccination in up to 74% of patients. Therefore, decisions on vaccination need to be made on a case-by-case basis. In patients receiving kinase inhibitors, assessment of antibody titers and revaccination (if necessary) is recommended for adequate seroprotection. 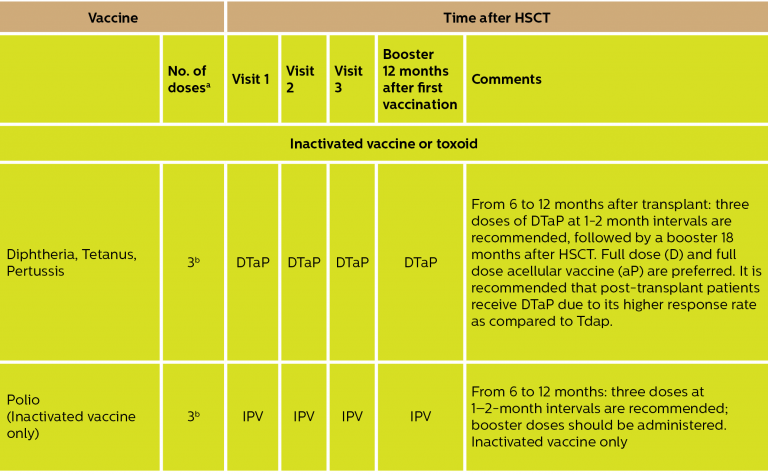 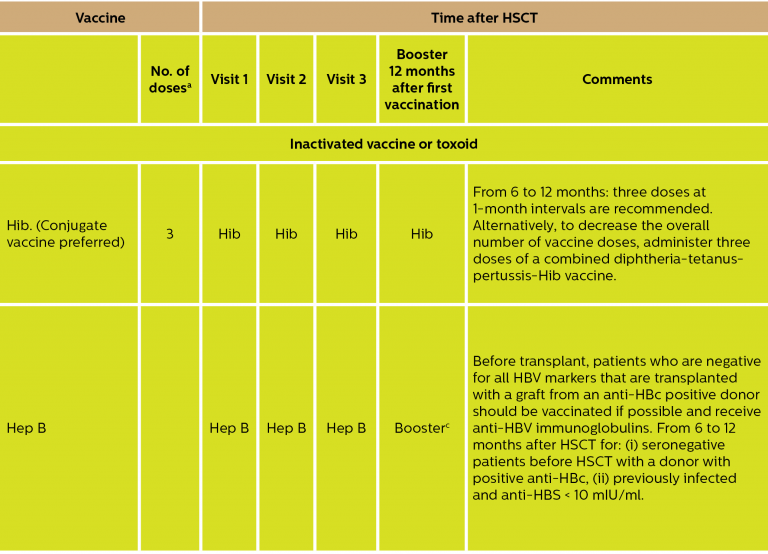 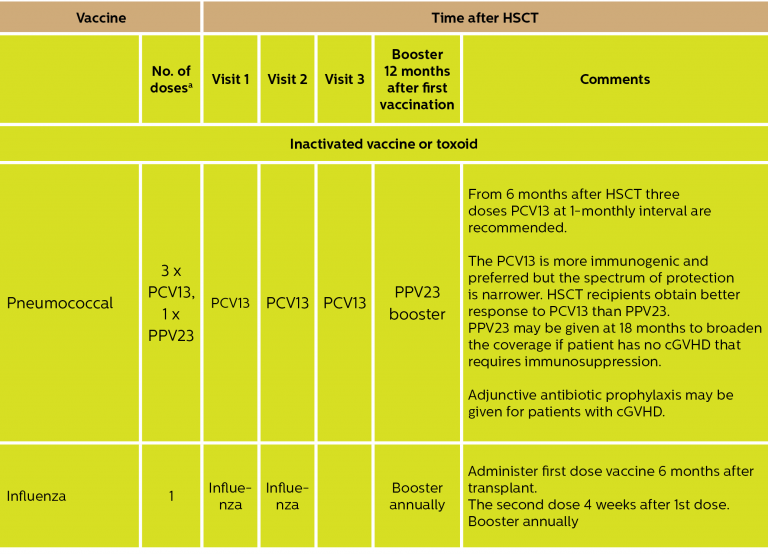 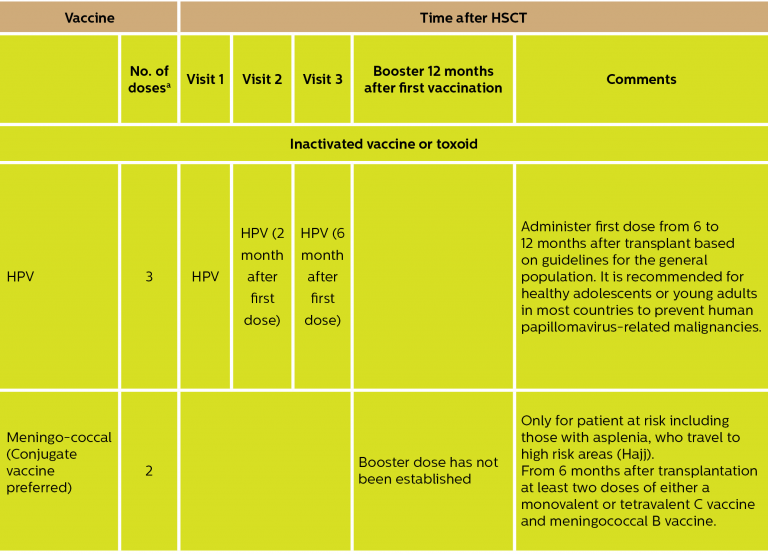 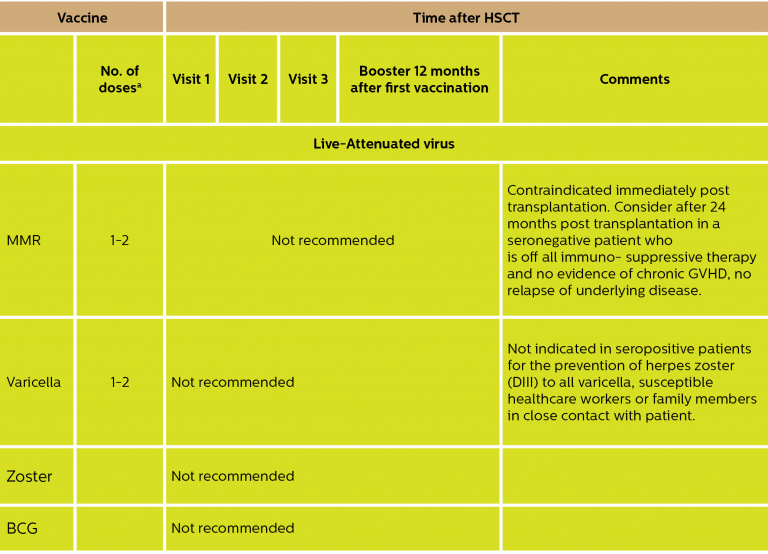 a if not specified, otherwise, the interval between dose is 1 month,
b the interval between dose is 1-2 month,
c Check titres 4-8 weeks after last dose of post-transplant vaccine; if anti-HBs is < 10 mIU/ml, an additional 3 doses should be considered, but the benefit of this second series of vaccination is uncertain. A high dose formulation is preferred for these booster doses.
cGvHD; chronic graft versus host disease. 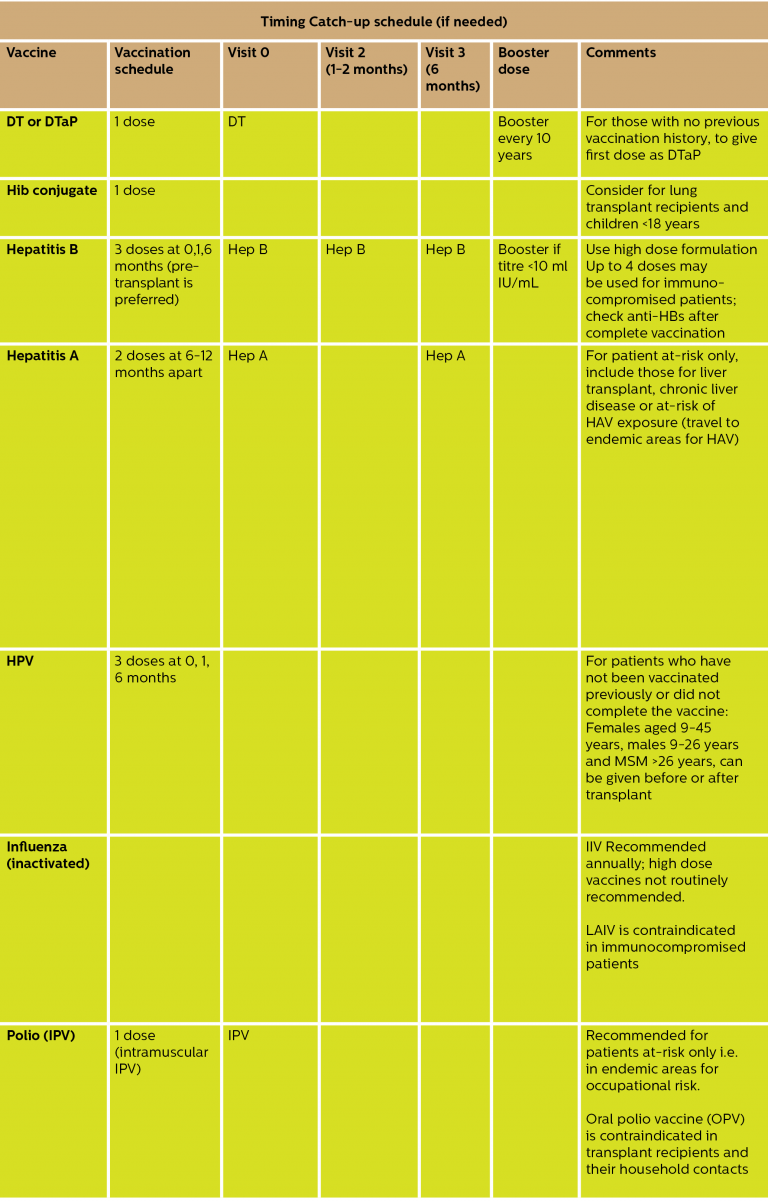 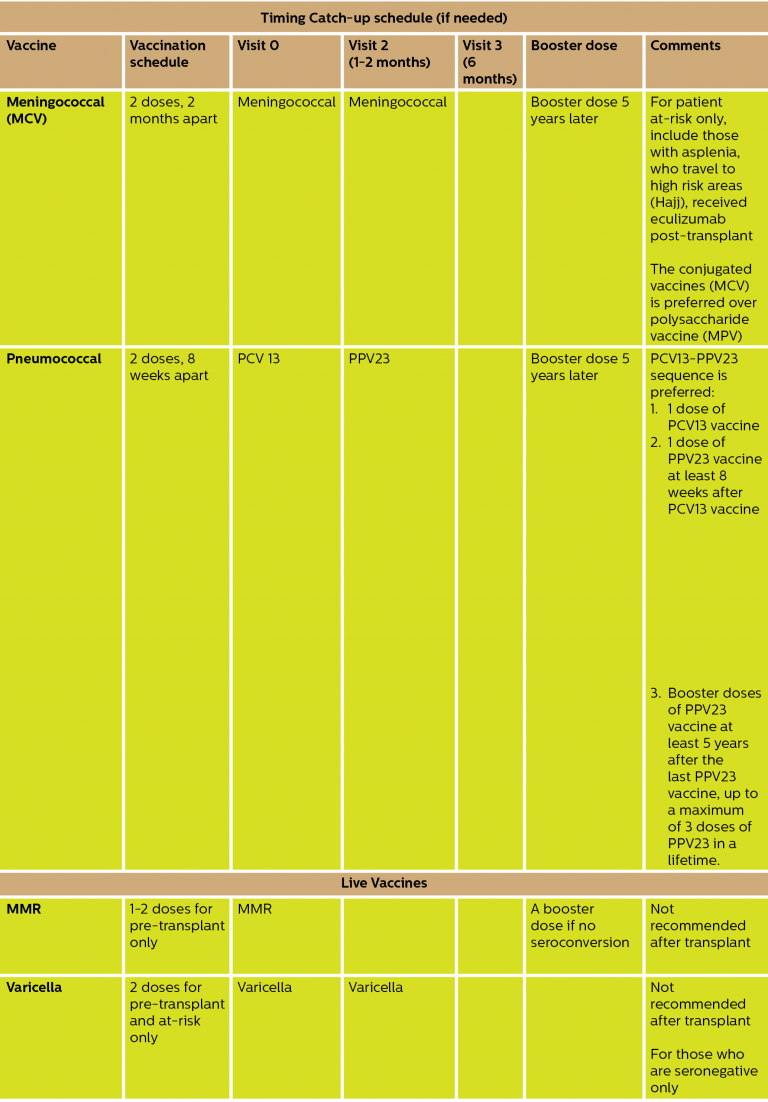 HBV: High-dose vaccine should be used pre-transplant in dialysis patients and after SOT.5 In general, anti-HBs titers should be monitored post-transplant and booster doses (1–3 boosters) should be administered if titers fall below protective levels (<10 IU/mL). In persons that are primary non-responders, a repeat vaccine series using high-dose vaccine can be administered. If seroconversion is not achieved, counselling regarding post-exposure prophylaxis and avoidance of high-risk behavior can be provided.