Rabies is an acute progressive and almost always lethal zoonotic neurological infection. It is caused by rabies lyssa virus (formerly known as rabies virus) and family Rhabdoviridae. The enveloped RNA virus is ubiquitous worldwide except in Antarctica and some islands. Each year approximately 60,000 people die from rabies infection; more than 80% of the deaths occur in Asia and Africa. A further 15 million people receive post-exposure prophylaxis (PEP) against rabies every year.

Dogs are the most important animal reservoir for RABV. In rabies endemic areas virtually all human rabies cases are caused by infected dogs. RABV, which is found in saliva of an infected host, is predominantly transmitted through the bites, licks and scratches of rabid animals to new susceptible hosts. Direct person-to-person transmission of rabies has not been confirmed, except through organ transplantations that involved rabies-infected donors. The incubation period of the dreadful zoonotic infection is remarkably variable, although most of the infected humans become symptomatic between 2 and 3 months after exposure.

An on-going rabies outbreak affecting humans, dogs and cats was first detected in the southern region of Sarawak in July 2017. As of 9 September 2020, a total of 25 human rabies cases have been reported in Sarawak.

There is no effective antiviral treatment once the rabies symptoms appear. Whilst the case fatality rate of human rabies exceeds 99% for those previously unvaccinated and did not receive any PEP, rabies is preventable through the use of safe, highly effective and well-tolerated modern, concentrated, purified cell culture and embryonated egg-based rabies vaccines (CCEEVs).

WHO Recommends 2 Key Human Immunisation Strategies for the Prevention of RABV Infection:

Figure 14.1 Post-exposure Prophylaxis (PEP) Based on Category of Exposure and Rabies-Immune Status (Adapted from WHO Position Paper April 2018) 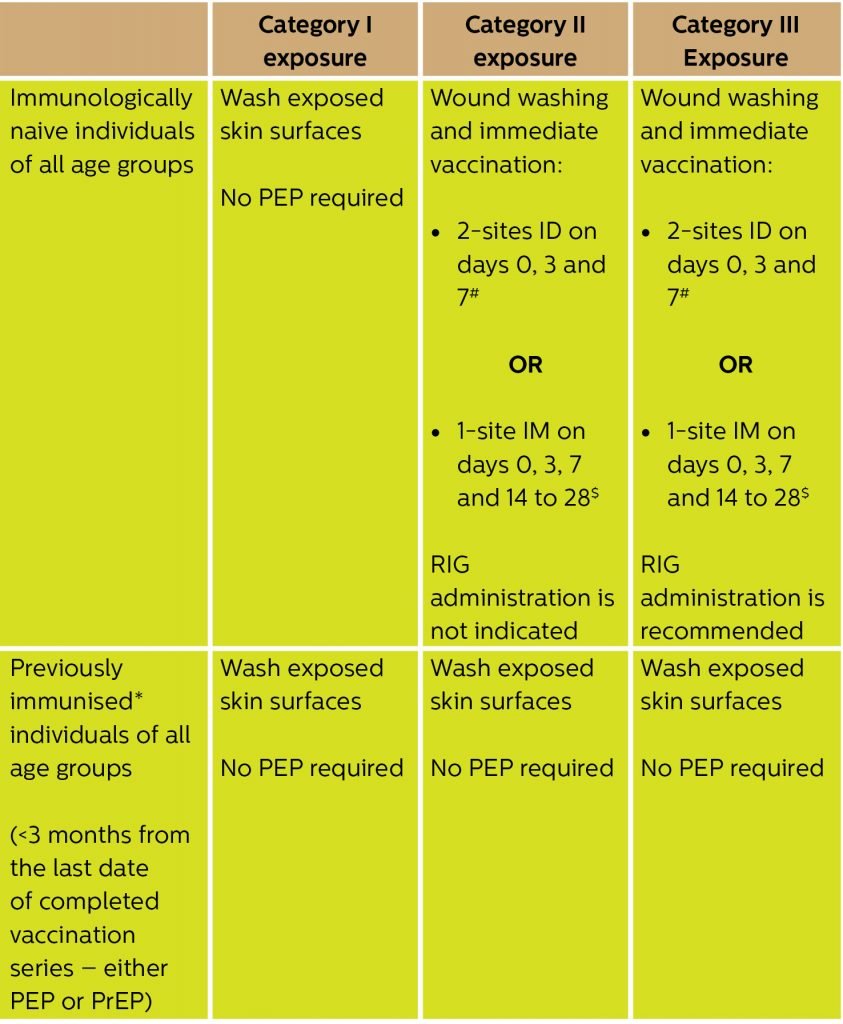 *Individuals with documented evidence of previous PrEP, or at least 2 previous administrations of rabies vaccine as PEP, are considered previously immunised and benefit from an abridged PEP without RIG in case of exposure.
In the case of HIV-infected individuals who are not on ART or on ART but CD4 count <200cells/mm3 and other potentially immunocompromised individuals, a full course of rabies vaccine with RIG is indicated, even if they are previously immunised. All immunocompromised cases that need PEP should be referred to infectious disease specialist.

Mode of Administration of Rabies Vaccines

# RIG and Mab are not readily available in Malaysia but may be imported upon special request from the Ministry of Health. The import permits of the biologics may be applied by using Borang Bpf/213-1: Borang Permohonan Mengimport/ Mengilang Keluaran Tidak Berdaftar Bagi Tujuan Merawat Penyakit Yang Mengancam Nyawa (http://www.pharmacy.gov.my/v2/sites/default/ files/document-upload/bpf213-1_1.pdf). Further detailed information may be obtained from Application Guidance Notes (http://www.pharmacy.gov.my/v2/sites/default/files/ document-upload/panduan-syarat-mengisi-borang-lampiran-bpf213-1-pindaan-1.pdf). The completed forms should be submitted to:

Mode of Administration of RIG and Rabies mAb

Co-administration with Other Vaccines

Rabies vaccines can be co-administered with other inactivated and live vaccines, using separate syringes and different injection sites.

To date, the most frequently reported adverse event for rabies received by the National Pharmaceutical Regulatory Agency (NPRA) is pruritus, headache and fever.

Unlike nerve-tissue derived rabies vaccines that can induce severe adverse reactions and is no longer recommended by WHO, CCEEVs are safe and well-tolerated. Minor and transient local adverse reaction such as erythema, pain and/or swelling may occur at the site of injection in 35-45% of recipients. Mild systemic adverse events such as transient fever, headache, dizziness and gastrointestinal symptoms, have been reported in 5–15% of recipients.

Modern CCEEVs are highly immunogenic. They induce a prompt and strong vaccine-induced neutralising antibody response to the G protein of RABV. A minimum serum antibody concentration of 0.5 IU/mL is widely used and recommended by WHO as a measure of adequate seroconversion following vaccination. The antibody titer is reached by day 7–14 of a PEP regimen, with or without simultaneous administration of RIG in most individuals, regardless of their age or nutritional status.