Tetanus is caused by Clostridium tetani which produces a potent toxin that has two components, i.e., tetanospasmin (alpha-neurotoxin) and tetanolysin (alpha-haemolysin). The organisms usually gain entry through open wounds and lacerations or via penetrating injuries. Neonatal tetanus is due to infection of the baby’s umbilical stump. Tetanus is not transmitted from person to person.

Tetanospasmin is mainly responsible for the features of tetanus which manifests as rigidity and painful spasms of skeletal muscles. The muscle stiffness usually involves the jaw (lockjaw) and neck and then becomes generalised. The disease is often fatal and death results from respiratory failure, hypotension or cardiac arrhythmia.

The case-fatality ratio for tetanus is highest in infants and the elderly and is approximately 10%-20% even in modern health care facilities. The risk for both tetanus disease and mortality was higher among persons aged ≥65 years than in persons aged <65 years. Tetanus occurs almost exclusively among persons who are unvaccinated or inadequately vaccinated or in those whose vaccination histories are unknown.

Due to widespread immunisation, tetanus is now a rare disease in Malaysia. In 2018, the incidence rate of neonatal tetanus and other tetanus was 0.08 and 0.09 per 100,000 population respectively.

As tetanus is associated with apparently minor or trivial injury, especially in the elderly, active immunisation is thus important for its prevention.

The dose of all tetanus-containing vaccines is 0.5mL, to be given by intramuscular (IM) injection.

Co-administration with Other Vaccines

The only absolute contraindication to tetanus containing vaccines is anaphylaxis reaction after the previous dose, or to any component of the vaccine.

The adverse reactions to a single dose of Tdap are similar in adults and adolescents, whether administered shortly (18 months) or at a longer interval after a previous dose of a vaccine containing tetanus/diphtheria toxoids. Thus, frequent administration of tetanus toxoid does not increase the risk of developing injection site reaction as had been perceived previously.

For wound management, the need for active immunisation, with or without passive immunisation, depends on the condition of the wound and the patient’s vaccination history (refer to Table 3.1).

A dose of Tdap is recommended to be given as soon as feasible to all healthcare workers who have not received Tdap previously. Td boosters are advocated every 10 years thereafter.

Tetanus vaccination stimulates the production of antitoxin and protects against the toxin produced by Clostridium tetani in contaminated wounds; however, it does not prevent the growth of the organism.

Complete immunisation (3 primary doses and 2 booster doses) induces protective levels of antitoxin throughout childhood and into adulthood. However, by middle age, about 50% of vaccinated persons will have waned immunity. A single dose of tetanus toxoid produces a rapid anamnestic response in such persons. 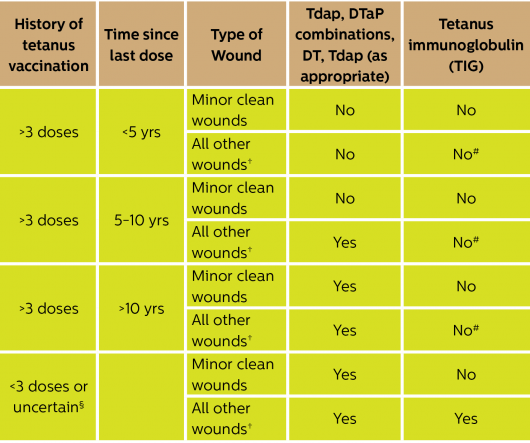 *The recommended dose for TIG is 250IU, given by IM injection, as soon as practicable after the injury. If more than 24 hours have elapsed, 500IU should be given. Because of its viscosity, TIG should be given to adults using a 21 gauge needle. For children, it can be given slowly using a 23 gauge needle.

† All wounds other than minor clean wounds should be considered ‘tetanus-prone’.

# Individuals with humoral immune deficiency (including HIV-infected persons who have immunodeficiency) should be given TIG if they have received a tetanus-prone injury, regardless of the time since their last dose of tetanus-containing vaccine.

Recommendations for Vaccination for Pertussis, Tetanus, and Diphtheria